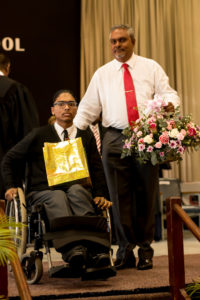 We hosted our annual Senior Phase Prize Giving on Friday, 21 October. Congratulations to all our awardees. Particular mention of our major prize awardees: The Cedric Hilson Honour Prize which is awarded to the learner whose courageous effort in the face of physical difficulties was received by Caden Maharaj. The Monty Goldstein Memorial Prize for unfailing good manners and perseverance was received by Musawenkosi Dlamini. The Shelly Altshuler Memorial Prize is awarded to the learner who promoted contact between the school and the public and was received by Unathi Mtolo. The Roberta Mclean Award for outstanding qualities was received by Lwando Ntinkinca. The Umbilo Police Trophy for their contribution to service and community was received by Sikhulile Ntshangase.